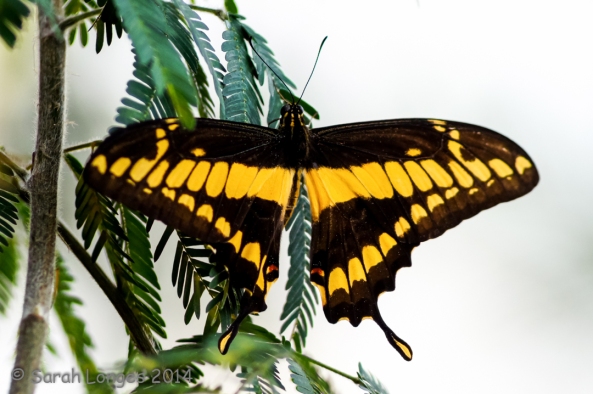 In other words: Swallowtail Butterflies! The word papilio is the latin for butterfly.

I found three members of this family today at RHS Wisley Gardens on my first foray into the 2014 Butterflies In The Glasshouse event.

The King Swallowtail or Thoas Swallowtail (Papilio thoas) is found in the southernmost United States, Mexico, Central America and South America (as far south as Argentina and Uruguay). Today was the first time that I’ve managed to photograph one!

The Great Mormon (Papilio memnon) is a large swallowtail found in southern Asia. It is widely distributed and has thirteen subspecies. The female is polymorphic and with mimetic forms. In other words there are a number of different forms, that interbreed, living in the same habitat. Females can mimic other butterflies in appeareance, often to deter predators, so it’s not unusual to see a Great Mormon male mating with what looks like the Asian Swallowtail female. It’s probably a mimic! As many as twenty-six female forms are reported.

Nature Connection with a Camera